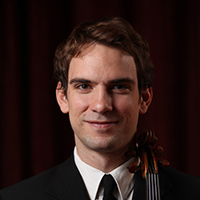 Hungarian violinist, Zsolt Eder, has established himself as a versatile and engaging performer and teacher. He is the newly appointed Professor of Violin and Viola at Washburn University and has been Concertmaster of the Topeka Symphony Orchestra since 2011.

Based in Kansas City, Zsolt maintains a busy schedule of concerts that includes solo, chamber music and orchestral work. In 2017 Zsolt appeared as guest Concertmaster of the National Symphony of Colombia (South America) and was soloist with the Washburn University Orchestra in Arturo Cardelus’ Con Aire de Tango. In 2016 he premiered a Violin Concerto by Joseph Kern, written for him and the Midwest Chamber Ensemble, and performed Beethoven’s Violin Concerto with the Medical Arts Symphony of Kansas City. Zsolt also has ongoing collaborations with Ensemble Iberica, Spire Chamber Ensemble, the Kansas City Baroque Consortium, jazz group Alaturka, and performs frequently as part of the Kansas City Symphony.

Zsolt has performed extensively in North and South America, Europe, Asia, and Australia. Highlights include performing in the first Canadian Ring Cycle (Wagner) with the Canadian Opera Company, at the Beijing Modern Music Festival in China, IMS Prussia Cove in England, and at the International Classical and Folk Music Festival in Kyrgyzstan. He has performed as a soloist with the Cleveland Institute of Music Symphony Orchestra, the Topeka Symphony, the City of Asuncion Symphony Orchestra (OSCA) in Paraguay, the Parlando Chamber Orchestra (Hungary), the Via Salzburg Chamber Orchestra (Toronto, Canada) and the Midwest Chamber Ensemble (Kansas City). He has appeared live on Hungarian National Radio and ABC Australia.

Born in Budapest, Hungary, Zsolt spent most of his childhood in Perth, Australia. College studies brought him first to Toronto, Canada, where he studied with Lorand Fenyves. Zsolt then continued with Paul Kantor at the Cleveland Institute of Music, earning his Bachelors and Masters Degrees there. He also studied baroque violin with Jeanne Lamon (Toronto). In Kansas City he studied with Benny Kim and Noah Geller at the UMKC Conservatory.

In addition to Washburn, Zsolt teaches at the UMKC Academy’s Musical Bridges Program, providing free lessons for kids in Kansas City, Kansas. He is passionate about education and has worked for social projects CityMusic Cleveland and Harmony Project KC. He has also taught at the Heartland Academy, the UMKC Academy and the Blanche Bryden Institute at the Sunflower Music Festival.