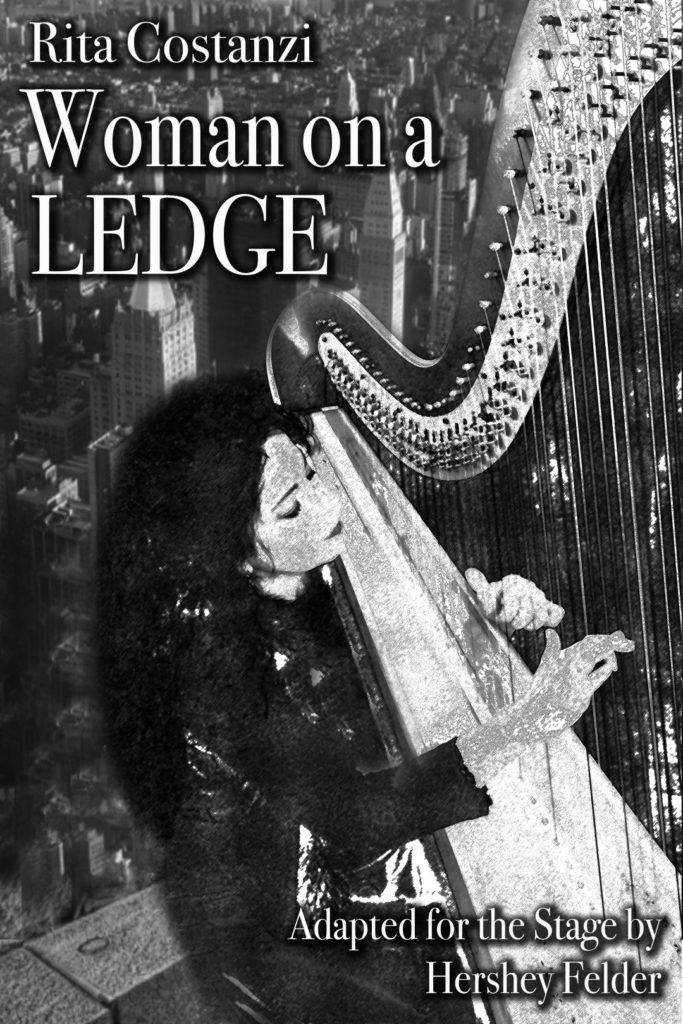 Reserve your in-person tickets
Register to watch the livestream

A New Play with Music

Adapted for the Stage by Hershey Felder

From the writings of Rita Costanzi

Rita Costanzi’s life story explores the vulnerabilities experienced as a female musician torn between the needs of her artist’s soul and those of her husband and children. Integrating solo harp music and theatrical performance, WOMAN ON A LEDGE is a story of love, devotion, conflict and loss, all set to some of the most beautiful music ever composed.

” Hershey Felder (playwright) is a pianist, actor, producer, playwright and director. He is known to audiences for his “composer plays,” Chopin, Debussy, Tchaikovsky, Gershwin, Bernstein, Berlin, Beethoven, and Rachmaninoff. He has directed and produced plays in the United States and the United Kingdom focusing on great music and musicians. In 2020, Hershey Felder established LIVE FROM FLORENCE, An Arts Broadcasting Company that broadcasts high quality musical programming throughout the world, directly from his studios in Florence, Italy. “

The Artist gratefully acknowledges Charles Stegeman and Hershey Felder for their  invaluable support and assistance in bringing this story to the stage.

“This World Premiere is dedicated to my Mother, Mary Iannotti, who gave up her own life as a dancer for her husband and children.”

Reserve your in-person tickets
Register to watch the livestream

“An Artist of immense gifts”

Through her depth of expression as an internationally recognized harp soloist, actor, writer and teacher, Rita Costanzi, in the words of Celtic Singer/Author, Treasa O’Driscoll, “bears the mark of the true artist whose task it is to rise above the tumult of the times. A force of truth and love in herself and a musician of exceptional accomplishment, her playing never fails to touch the souls of listeners in deep and unexpected ways.”

Winner of The 2020 Hershey Felder Presents Arts Prize Competition, Costanzi’s short documentary film “Moonlight in the Bronx”,  captivated viewers around the world with its moving, powerful and timely memorial to Ludwig van Beethoven and the victims of the Corona Virus. Heralded as “A Hymn to New York” – it conveys, with profundity and grace, a vital message for our times in its portrayal of  Beethoven’s isolation through deafness,  the world’s through Covid-19 and her own, through divorce.  Costanzi wrote, directed and performed her original script, reflecting yet again, her “warmth, conviction and exquisite virtuosity .”

In this Sunflower Festival World Premiere, Woman On A Ledge, by acclaimed pianist/actor/producer/director, Hershey Felder, Costanzi is honored to bring her life story to the stage in this groundbreaking, powerful hybrid of solo harp music and theatrical performance. It is the culmination of her life’s work – expressing the female musician’s fraught and complex life experience with its conflicts, devotion, love and loss.

Since relocating to New York City in 2007, she has collaborated with Director, Arthur Masella, long-time Associate of Hal Prince, on an award winning one-woman show which was featured at The United Solo Theater Festival in New York City, The Ottawa International Festival and at The World Harp Congress in Sydney. An acclaimed international soloist and teacher, Costanzi has performed and given Master Classes in North and South America, Europe and Canada. Recently, she recorded Michael Kurek’s Serenade for Cello and Harp on Parma Records along with continuing her solo and chamber music performances at The Sunflower Festival in Kansas and The Buzzards Bay MusicFest in Massachusetts.

Ms. Costanzi’s training began at an early age under the guidance of her father, the noted violist Francis Tursi, and harpist Eileen Malone. After graduating from the Eastman School of Music with Highest Distinction and the Performer’s Certificate, she furthered her studies with Bernard Zighera, Marcel Grandjany, and in France on an ITT International Fellowship with Jacqueline Borot. She was twice winner of the American Harp Society’s National Competition and recipient of the Lily Laskine Award for the most outstanding solo harp recital.