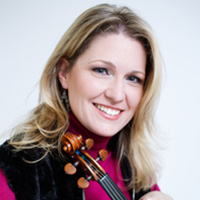 Rachel Robinson Stegeman is a native of Washington D.C. and began her violin studies at age 8. As a student of National Symphony Concertmaster William Steck, she quickly developed her performance skills, winning the opportunity to solo with the National Symphony Orchestra with the Tchaikovsky Violin Concerto. While establishing herself in the D.C. area in 1984-1989, she performed with the National Symphony and Kennedy Center Opera Orchestra (as well as many other orchestras in the area), performed in a string quartet at the White House, traveled to Rome to perform for the Pope, and later won orchestral auditions that led her to California, both with the Pacific and Sacramento Symphonies. After relocating in 1989 and accepting a principal position in the Pacific Symphony in Southern California, Stegeman gradually became one of the most sought after violinists in the recording industry, performing on sessions in the motion picture industry, as well as the television and record industries. She was also hired as a substitute in the Los Angeles Philharmonic for concerts and tours. Shortly thereafter, she won the position as Assistant Concertmaster of the Los Angeles Chamber Orchestra, and also won the position of Assistant Concertmaster of the Hollywood Bowl Orchestra. While in Los Angeles, Stegeman performed in many live broadcasts and taped television work, for shows such as Jay Leno, Craig Kilborn, various local news programs, Days of Our Lives, the American Music Awards, VH-1 Awards, E.T. 50th Anniversary Live with Steven Spielberg and John Williams, and several years of The Academy Awards as an orchestral member. As a full time employed studio violinist, she performed in over 800 major motion picture soundtracks, 50 television shows, 600 records, as well as commercials for television, live performances broadcast on the radio, and other live concerts throughout the area. She has recorded many genres of music including classical music, chamber music, jazz, pop, R&B, contemporary jazz, easy listening, rock and roll, heavy metal, and movie soundtracks for over 100 labels worldwide.

Stegeman made a massive career change when she moved to Pittsburgh in 2002. She is an Adjunct Professor of Orchestral Literature and Repertoire and Applied Violin at Duquesne University’s Mary Pappert School of Music. She also holds the positions as Concertmaster of the Wheeling Symphony (WV) and Youngstown Symphony (OH), Associate Concertmaster of the Pittsburgh Opera Orchestra, and Associate Concertmaster of the Pittsburgh Ballet Orchestra, as well as a Guest Concertmaster at West Virginia Symphony and Johnstown Symphony. She is very involved with the Pittsburgh Symphony, performing with them on many of their season concerts and international tours since 2009. She is involved in several summer music festivals, both national and international, such as Sunflower Music Festival, Buzzard’s Bay Music Festival and previously the St. Barth’s Music Festival in the French West Indies. She continues her chamber music collaborations here in Pittsburgh and at music festivals with well-known artists who live around the world.

Her instrument is a H. Fagnola violin (Italian) of the year 1923. Her teachers include Ramona Coppage, Leslye Gartrell, Luis Haza, William Steck, Robert Lipsett, and Sidney Harth. She studied music at Catholic University (in Washington D.C.) and graduated from Duquesne University in both Undergraduate and Graduate Violin Performance Degrees.