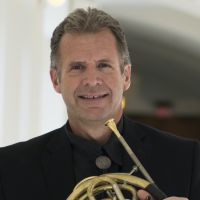 Gregory Miller is an accomplished chamber musician, orchestral player, soloist, and teacher. He was appointed hornist of Empire Brass in 1997 and has presented hundreds of concerts, masterclasses and clinics throughout the world at venues which include Carnegie Hall, the Kennedy Center, Suntory Hall, the Barbican Center, the Mozarteum and the Musikverien. His recordings with EBQ, Class Brass: Firedance and The Glory of Gabrieli,appear on the Telarc label.

As a soloist, Gregory Miller has performed with the United States Navy Band of Washington DC, the National Symphony Orchestra of Costa Rica, the Daegu Symphony Orchestra of South Korea and the American Wind Symphony among others. His solo recordings, From Bach to Bernstein and Solos for the Horn Player, appear on the MSR label.

A native of Youngstown, Ohio, Miller received his BM in Horn Performance from the Oberlin College Conservatory of Music where he studied with Robert Fries, former co-principal horn of the Philadelphia Orchestra. Gregory Miller is married to violinist Laura Hilgeman and together they have six children.