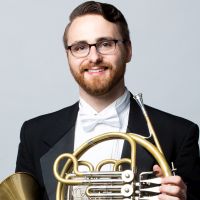 Benjamin Bacni, native to Ohio, received degrees in Horn Performance from Bowling Green State University (BM, 2014) and University of Missouri-Kansas City (MM, 2016) studying with Dr. Andrew Pelletier and Martin Hackleman, respectively. Upon moving to Kansas City, Mr. Bacni was appointed Principal Horn of the Topeka Symphony Orchestra, where he played until 2017 and has since focused on freelance performing. Along with his freelancing, Mr. Bacni was appointed, and is currently 4th Horn of the Wichita Symphony Orchestra since 2019.

In August 2015, Mr. Bacni competed in the International Horn Competition of America, where he won 1st prize in the University Division, as well as received the Gretchen Snedeker Prize for his interpretation of Tim Martin’s Lament for Unaccompanied Horn.

Mr. Bacni’s goal is to maintain a balanced life, always grow as a person, musician, and horn player. In doing so, he maintains a full schedule as part-time barista at Starbucks, and an ever-growing at-home baker.