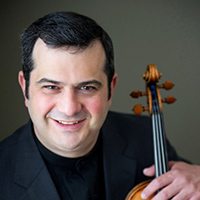 As a soloist and orchestra musician, Mandl has collaborated with notable conductors such as Eleazar de Carvalho, Gunther Herbig, and Robert Shaw, among others.  Most recently, Mandl has appeared as soloist with the Kenosha Symphony Orchestra and the Racine Symphony – where he holds Concertmaster positions – and the Paraiba Symphony Orchestra.

A dedicated and passionate chamber musician, Mandl has collaborated with eminent artists, such as Yo-Yo Ma, Jian Wang, Mathieu Dufour, Aldo Parisot, Frank Morelli, Sidney Harth and Amit Peled.  He is a founding member of the Philomusica String Quartet, and the Quintessence Piano Quintet, which performs in the Dame Myra Hess Memorial Concert Series, with live broadcasts on WFMT Chicago.

Mandl is the Board President of Milwaukee Musaik/Milwaukee Chamber Orchestra, where he is also Assistant Concertmaster and guest conductor.